BRC2018: A Convention on Campus

I remember my first visit to what was then called "Railways Staff College." I had been invited to tell the young Railway officers what is this technology called Internet. I had taken the Avadh Express from Kanpur. In the AC-2T coach, my neighbor was a young girl studying in some college, and a person with guns and all with her. We were going to be together for 24 hours, so it was natural that I tried to strike a conversation with her. But once the bodyguard proudly told me how many murders he had done, conversing with her did not seem like a great idea. There was no food vendor throughout the journey. So when the train reached Kota, it was supposed to stop for 15 minutes. I jumped out, ran to Platform 1, ordered some food, and when I was still on the footbridge, the train had started moving after only 10 minutes. Somehow managed to get on to the running train. Age was on my side then. Late night, I reached Vadodara. A car was there to receive me. Was taken to RSC campus, and I was in this palace.

An attendant opened the door and it was nice. Large room, with good paintings. Good sofa, and a table. Nice electrical fittings. But very soon I realized that a bed appeared to be missing. But before I could ask, the attendant had opened another door. This room was only for people to wait for the person living in the other room. I could immediately guess how Maharajas would have lived. Everything was the best it could be. A king sized bed, a dining table, a sofa, TV, refrigerator, two ACs, the finest crockery, chandeliers, and all that. The path to bathroom was through a walk in closet which could have been a room by itself, and the bathroom was bigger than most apartments in Mumbai. I had never lived in such luxury. I kept going back every few months to give lectures to the next batch, and the next batch and so on, and every time, I stayed in the same room. (It is another thing that when I was checking out, the person asked for my basic pay. I was deemed too junior and not eligible for Air conditioning, and since I had used ACs, I had to pay for it a royal sum of five rupees or so. The room which could easily fetch a rent of Rs. 5,000 was free for me as an RSC guest, but I had to pay for the AC. I was so amused that I told some folks during my next trip. The Director General came to know of it, and he decided that as a special case, I could use AC without paying those five rupees on all my future visits.) 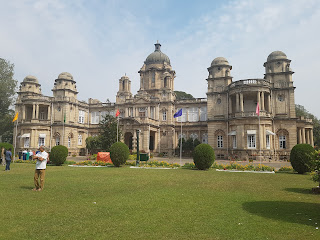 In recent times, I have been to National Academy of Indian Railways (NAIR, its new name), but with Ahmedabad as my base, go there by morning train and come back by evening train. So I was going to stay on campus after more than 2 decades. I knew they had converted those rooms into offices, and in any case, as a delegate to Indian Railway Fan Club 13th annual convention, I would get the same type of room that everyone else will get, but frankly, the association of NAIR with those rooms was so strong in my mind, that it wasn't going to be easy living in their hostels, even though I must admit that they are quite fine and meant for railway officers. 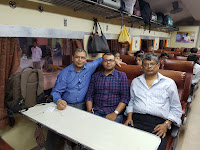 The convention, for me, started at Ahmedabad Station when I met Bappa Da and Zeeshan Fatmi in the Chair Car of Gujarat Queen, and by some stroke of luck, we three had consecutive seats. We started talking and the time flew, and just after 08:00 PM, more than 10 minutes before its scheduled arrival, it was standing on PF#1 of Vadodara Station, as if it was keen that we reach the convention venue as soon as possible. We had not even left the station that more delegates arrived. Every train coming to Vadodara was carrying delegates for the convention. The Whatsapp group of the delegates was buzzing with messages, more than 1000 of them in a day. Everyone telling others which train, which coach they are in. Who are others in that train. Where is that train right now. Which engine is hauling it. Which train they overtook or which train overtook them. That activity had started the previous day itself as people were traveling long distances to reach Vadodara. 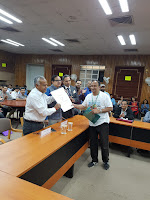 Formally, the convention started next day. Director General of NAIR, Mr. Gupta, welcomed us. This was a rare occasion that NAIR had allowed a private gathering on its campus. All the rail fans, were, of course, very grateful to him for this. We had two of the founding members of IRFCA attend the convention (besides me), Mani Vijay and Pushkar Apte. After the welcome speech by DG, he and Pushkar hit the gong. The person who should get the maximum credit for founding it, Vijay, was with us for the first time, and he is seen handing over the IRFCA calendar (and rest of the kit) to DG. The calendar is a beauty, and the best part of it is that it is always February to January. I always get calendars as gifts in January. So if I need to look up a date in the beginning of the year or I need to mark something for the future in the month of December, the only calendar at home that allows me to do this is the IRFCA calendar. And this time, it is really special with so many old restored railway photographs. The inaugural ceremony also included a beautiful song on harmonica by Deepak Modgekar. 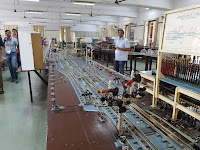 NAIR had not just opened its hostels and conference room, but had also opened its heart. They allowed access to its famed model room, where a passionate instructor told us all about signaling and train movement with actual working models. 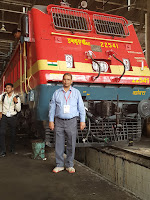 And it wasn't just NAIR, but the entire Railways establishment which wanted its fans to go back home happy. We went to the Carriage and Wagon workshop at Pratapnagar, the museum next to it, the Electric Loco Shed at Vadodara and the Electric Training Center right next to it. Only in a few conventions we have had so much outdoor activities (namely, BSL2011 and MGS2013).

No railway journey is complete without lots of good food from the places that you are passing by. How can you go past Agra and not eat its famous Petha. The food is an equally important component of our conventions. And this time, the officers' mess at NAIR, provided the best that Gujarati cuisine had to offer. I can not show any pictures because I don't want my family to know what I have eaten these two days.

The convention also included an exhibition of railway
memorabilia. Old tickets, old timetables, even the tender document for the Victoria Terminus station (now Mumbai CST). A reservation for exactly one KM of journey is possible, it seems. A lot of old and rare photographs. It was a treat for any railfan. I had carried the working timetables of all the divisions of the country, which I had for the last 25 years. At the end of the exhibition, it was decided that I won't be carrying them back to Kanpur, and we should auction them and the proceeds will go for maintaining the server for our website and forums. The auction could fetch about Rs. 20,000. I think Railways should think of putting up such items on sale online. There is perhaps a small market for such things which may not justify giving them shelf space in the National Rail Museum shop (and other such shops), but giving online shelf space would be a hit with the rail fans.

The quiz is the most awaited event year after year, even though most of us know that by getting close to 0 correct answers in the preliminary round, we stand no chance of getting to the finals. It is not just the thrill of answering a question, but learning so many new things about Indian Railways through those questions. In fact, people like me get no chance to be thrilled, but are only happy learning new things. But this time, they made a change in the selection process. If in the top 8 in the preliminary round, there are more than 4 who have won the Quiz in any of the past conventions, then only top 4 of them will be selected and 4 more such persons will be selected who have never won the quiz. A great idea, but when you are ranked 100 out of 125, no such idea will help you get to the finals.

A fantastic presentation by Sachin Sharma, a fine Railway officer, on "Romance of Railways." This is a lecture he gives to new officers at NAIR, and we enjoyed it so much that it went way beyond its allotted time, and seeing the interest of the audience, the organizers could not really ask him to stop. A detailed discussion on a Railway Accident in the Ghats between Mumbai and Pune several years ago showed the depth of knowledge that some of the railfans have. And an excellent presentation on laying a new line.


While the support from NAIR obviously helped, but organizing a convention is not just about infrastructure. Having organized one in IIT Kanpur where we had received tremendous support from the campus, I know that the success depends crucially on planning everything in great detail. Registration process went very smooth this year. All the directions to the delegates were crystal clear. Proper arrangement about who is going to stay where. No confusion in anything. The menu was superb. The kit, including the calendar, the mug and the backpack, is just awesome. Transport arrangement for all the outdoor activities were nice. You think of it, and they had planned it. If it had taken a huge amount of time and effort, it didn't show on their faces. Always cheerful, always smiling, always willing to help further. At the end I told Khalidbhai. There is only one complaint. How dare you do things in a way that over two days, one cannot find even one negative thing to complain about. Complaining is our birth right, and you cannot take it away from us.

Three cheers to Khalid Kagzi, Sachin Buddhisagar, Nitin Master, and Raghavendra Rao and all other volunteers and members of organizing committee. 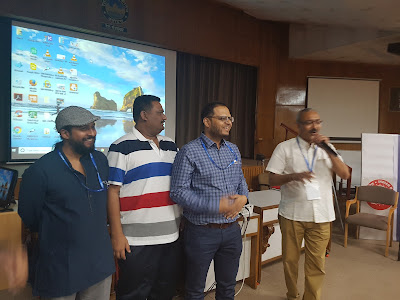 Posted by Dheeraj Sanghi at 1:53 AM